A corpus study of differences between prose poems and short stories 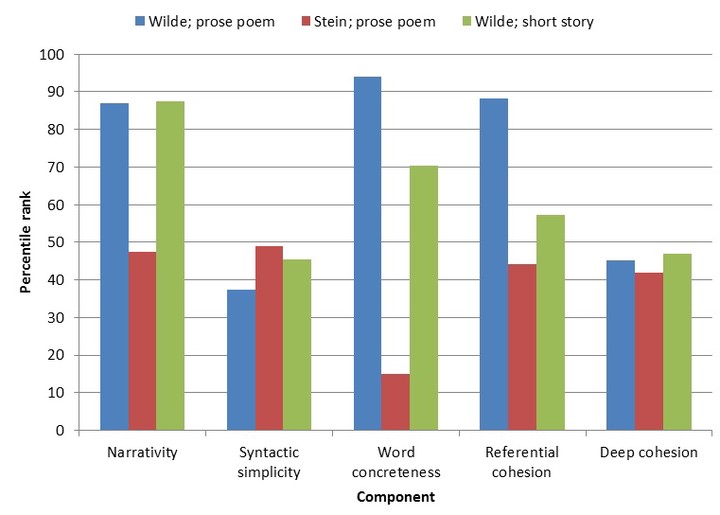 Prose poems are a very diffuse genre. They share characteristics with both short prose and poetry and can be very different in comparison to one another. One prose poem anthology (Clements-Dunham, 2009) categorizes them into as many as 24 categories and claims that some belong to more than one category!

In this case study, I wanted to test whether we can tell the difference between prose poems and short stories written by Oscar Wilde. I also included some prose poems by Gertrude Stein for comparison. The analysis was performed using the Coh-Metrix system, focusing on narativity, syntactic complexity, word concreteness, referential cohesion, and deep cohesion. Other text variables could have been chosen and if I were to continue working on this I would at least expand the set.

Much more can be said about this study and I did that in this publication which is unfortunately available in Serbian only (with an abstract in English).

In any case, you can enjoy reading Wilde and Stein. Here are Stein’s Tender buttons and two Wilde’s collections of short stories The happy prince and other tales and Lord Arthur Savile’s crime; The portrait of Mr. W.H., and other stories as texts from these sources were used in the study. I cannot find Wilde’s Prose poems online, but that’s the one you want.